Back to Series
Murder at Minnesota Point: Unraveling the captivating mystery of a long-forgotten true crime 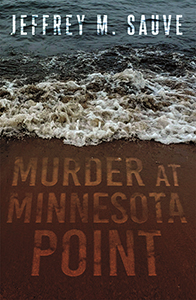 Billed as the crime of the century in 1894, Murder at Minnesota Point tells the twisted, sensational true story of a young, unidentified woman found slain on the isolated sandy shores of Minnesota Point, Duluth, Minn. For two weeks, her corpse was displayed for public viewing in hopes of discovering her identity. After she was buried in an unnamed pauper’s grave, her assailant breathed a temporary sigh of relief. Over the next two years, city detectives pursued numerous suspects from every corner of the country. The manhunt captivated a nation enthralled with the sensational details and deepening intrigue. Only by chance, an overlooked satchel containing incriminating evidence was brought forth, breaking open the case. Speculation suggested that the wanted man was a bigamist and a serial killer, having dashed his first wife in 1890 and two other people in 1893. His evil past included chumming with the infamous Minneapolis killer Harry Hayward.